Oh Jerusalem: Shawarmas, the shema and a tractor at church

I’ve lost count of just how many times I’ve been to Jerusalem, but one fact that is sure: Jerusalem never disappoints. The sights, sounds and smells overwhelm visitors to this ancient, complicated city. Jerusalem serves as the crossroads of three world religions: Christianity, Judaism and Islam. If you are an observer of people like me, you’ll enjoy the strange juxtaposition of exuberant religious devotion and rabid consumerism (of mostly religious-based trinkets and t-shirts with saying that aren’t quite right). In short, the history is captivating and so are the people.

We started the day on the Mount of Olives overlook and the traditional site of the Garden of Gethsemane, then on to the Western Wall. When we arrived at the Western Wall, large groups of Jewish men were praying and reading from the Torah (men and women are separated). I watched their outward show of devotion. Most were somber, rocking back and forth as they prayed. Others showed signs of joy as they sang upbeat songs. I approached the wall and prayed for the people who have stuffed notes in every crack and crevasse. I pulled out my phone and prayed the shema (Deut. 6:4-6) and Jesus’ retelling and expansion of the shema (Matt. 22:36-40). Shortly after I prayed through these scriptures, a rabbi surrounded by a group of young American Jews began singing the shema in Hebrew. Neat moment.

After the Western Wall, we followed portions of the Via Dolorosa as we made our way to lunch at Shaban’s shop. Pungent smells of spices, incense and tobacco waft through the narrow streets – most of which are closed to cars and packed with people coming and going. For lunch I ate a shawarma – hummus, turkey, lamb, fresh and pickled vegetables in a pita. Excellent. So good that I ate the extra shawarma the vendor sent by accident. 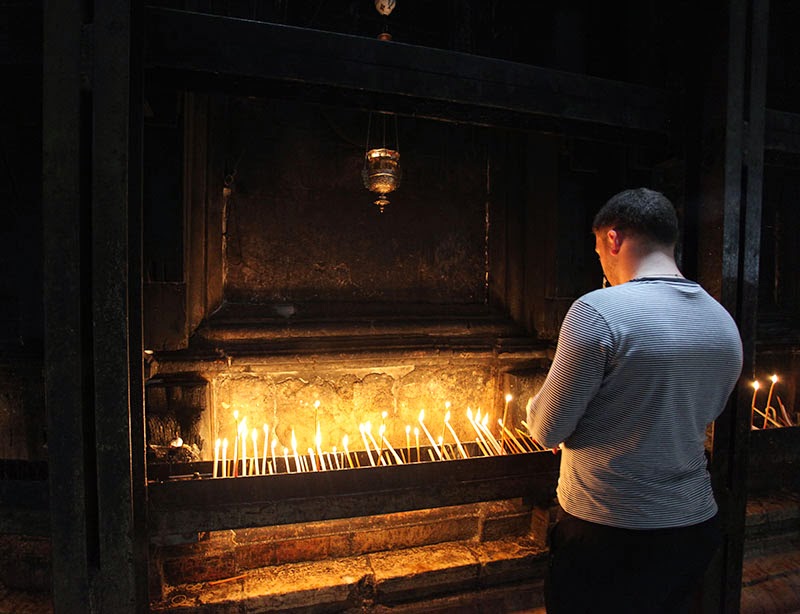 From Shaban’s we walked to the Church of the Holy Sepulchre – the traditional, and most likely site of Jesus crucifixion, burial and resurrection. Two large buildings, built shortly after 300 A.D., cover a rock outcropping which could be Calvary and the remains of First Century rock-cut tombs. Early Christian accounts connect the site with Calvary and Jesus’ burial tomb. The church is always packed with pilgrims longing for a chance to touch the place of the cross and to see the remains of Jesus’ tomb. Devotees often bow, make the sign of the cross over and over again as they shuffle through the church. Inside the largest room of the church is a small Russian Orthodox chapel covering the remains of the tomb. Pilgrims light candles all along the side of this enclosure which is covered in soot and grime.

It is cool to think that my salvation was secured through Jesus’ sacrifice at this place. But I don’t need this place to believe. Christ lives in me. His grace is sufficient. The layers of brass, marble, and religiosity baffle me. I do enjoy going to see how the people react.

Something new happened during this visit to the church. As we waited for members of our group to go see the traditional location of Calvary, one of the small, narrow tractors used to deliver goods to the shops in the Old City pulled into the church. The driver wheeled the tractor past the worshippers who were laying their faces across the “anointing stone.” Drove right past us as we clung to the wall trying to avoid being hit. The driver stopped at a chapel door near where we were standing. Working diligently, but in no particular hurry, the driver and his helper unloaded a large shipment of candles. Then he fired up the tractor, backed up next to those at the anointing stone and drove out leaving a thick trail of diesel exhaust. My first thought was “Now, I’ve seen it all. A tractor in the Church of the Holy Sepulchre.”  I doubt that I have “seen it all.” Not in the Old City. Jerusalem never disappoints. It is a busy place with many people seeking God. But many there miss THE POINT. Oh Jerusalem … I pray that you see Jesus.

One thought on “Oh Jerusalem: Shawarmas, the shema and a tractor at church”