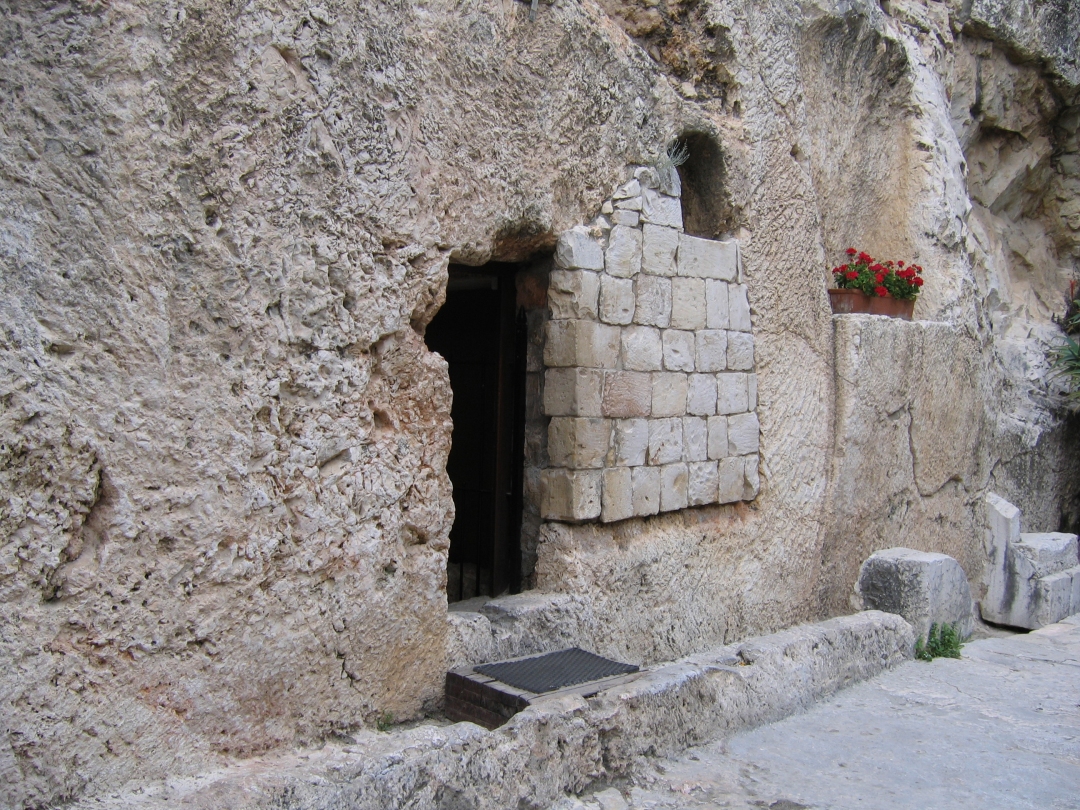 The thought of Jesus stepping out of the tomb on the first Easter morning is simply overwhelming. Jesus’ atoning death was punctuated by the miracle of His resurrection.

While the cross remains the undisputed symbol of Christianity; the empty tomb conveys the abundant life found in Christ. Just imagine seeing the empty tomb as it was that day.

As a believer, I have experienced the power of Jesus’ cross and His empty tomb. I don’t need to see the tomb to experience its power. As a student of the Bible and archaeology, I am compelled to learn as much as I can about the setting in which the Bible was written. Seeing the empty tomb is an exciting thought.

Archaeology offers a wealth of contextual information about biblical places, events and people. However, archaeology rarely offers proofs. Such is the case with the Jesus’ tomb. Archaeology alone cannot lead to the tomb. It is not as simple as locating an empty tomb. Many empty tombs dot the landscape around Jerusalem – emptied by the ravages of time and human raiders.

With these limitations in mind, what can one learn from archaeology regarding the tomb of Jesus? It turns out, quite a bit. With a little help from early church writers, the chances of identifying the location of Jesus’ tomb rises significantly.

First and foremost, archaeology confirms that the Bible gives an accurate, though not exhaustive, description of a first century tomb. The accounts of Matthew, Mark and Luke describe a tomb cut from rock with a stone to cover the opening. John implies the visitors to the tomb had to stoop down to enter (John 20:5, 11). Matthew (Matt. 27:60), Luke (Luke 23:53) and John (John 19:41) make it clear that the tomb was new and had not been used for other burials. This is an important distinction because tombs often included multiple burials (family tombs) and, at times, tombs from previous periods were reused.

In Archaeology & the New Testament, archaeologist John McRay writes that rock-cut, two-chambered tombs were typical for burials in first-century Jerusalem. The entrances of these tombs were typically low and blocked by a large stone, McRay writes. While many first-century tombs in Jerusalem have square blocking stones, examples of tombs with round blocking stones have been discovered.

Archaeology instructs us to look outside the city walls for the sites of Jesus’ crucifixion and the burial. According to Jack Finegan, author of The Archeology of the New Testament, Jewish and Roman customs dictated that executions and burials take place outside the city walls. Again the Bible agrees with what is known from archaeology. John 19:17 says that “he went out to the place of the Skull,” and John 19:20 places the crucifixion “near the city.” Hebrews 13:12 records that Jesus “suffered outside the city gate.”

Leading Candidates for the Site

Over the years, the two leading sites of Jesus’ burial and resurrection are the Church of the Holy Sepulchre and the Garden Tomb. 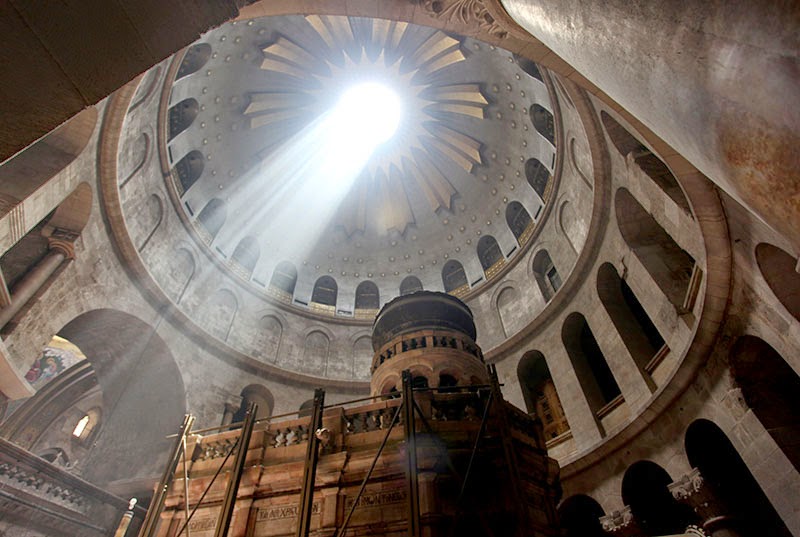 The traditional site, located inside the current city wall, is the massive Church of the Holy Sepulchre. The church covers the entire area thought to be the place of Jesus’ execution and burial. A smaller structure within, called the edicule (small house), has long been considered the place of Jesus’ tomb. While portions of the proposed Calvary hill are still visible, nothing resembling a rock-cut tomb is still visible in the edicule. The tomb area is overlaid with marble and completely enclosed by the edicule which resembles a small orthodox church. The overt religiosity of the site makes it an uncomfortable place for evangelical Christians, but it has been venerated since the earliest days of Christendom.

The Garden Tomb fits better with the evangelical concept of the garden burial mentioned in John 19:41. The peaceful setting includes a rock-cut tomb a short distance from a cliff which bears striking resemblance to a skull. First suggested as the location of Jesus’ burial in 1870s, the simple, worshipful atmosphere with an easily accessible tomb makes the Garden Tomb a must-see stop for Christians visiting Jerusalem. Located outside the walls of the Old City, the Garden Tomb is a short walk from the Damascus Gate.

After visiting both sites, part of me hoped that the Garden Tomb was the actual location of Jesus’ burial and resurrection. Archaeological evidence, however, is stacked against Garden Tomb. As a rock-cut tomb outside the city walls, the site fits some of the most general parameters. When one looks at the finer points of tomb typology, it is clear that the tomb does not fit the profile. According to McRay, the Garden Tomb was carved some 600 years before the time of Jesus and then reworked and reused during the Byzantine period. There are no first-century tombs in the general area.

While the tomb itself is not visible at the Church of the Holy Sepulchre, other factors seem to affirm the validity of the site. Other tombs in the church, some very near the edicule, date to the first century. Though located inside the current wall, it is well documented that Herod Agrippa I rebuilt the wall to encompass this area c. A.D. 44.

The activities of Roman Emperor Hadrian provide evidence in favor of the site. According to early church writers Eusebius and Jerome, Hadrian (c. A.D. 135) constructed a pagan temple on the site and installed statues of Jupiter and Venus. Romans commonly built temples to their gods on sites venerated by local, conquered populations. Construction of a pagan temple hints that early Christians were venerating the site as early as 100 years after the resurrection. Later, Constantine (c. A.D. 325) cleared the ruins of the pagan temple, found the tomb and built the first church and edicule at the site.

In his writings, Cyril of Jerusalem mentions that some of original rock around the tomb was cut away during construction of the Constantine’s edicule. Cyril also implies that he saw a rock-cut tomb before it was altered and adorned. Later, more of the rock was cut away. The current edicule built in 1809-10, is the fourth structure to cover the tomb. Though completely covered in marble in the Middle Ages, possibly to protect the rock from visitors, the layout of a two-chambered tomb is preserved. The back chamber includes a shelf or bench where Jesus’ body would have been laid.

Even if a thorough archaeological investigation were possible, excavation could not prove that the edicule covers the actual site of Jesus’ tomb. However, compelling evidence points to the site’s validity. At the very least, Jesus was likely crucified and buried in the general vicinity of this long-venerated site.

What to do when visiting Jerusalem

For evangelical Christians visiting Jerusalem, I would suggest visiting both sites. Though the Garden Tomb cannot be the location of Jesus’ burial, it does convey the idea of a rock-cut tomb. It is a worshipful site and well-worth a visit.

If you look past the layers of gold, marble and iconography, the Church of the Holy Sepulchre can be enjoyable and educational. And it is the most likely site of the resurrection. Stand in line to touch and see the place identified as Calvary. Stand in the long line to step inside the edicule. As you wait, take in the surroundings — the sound and scent of burning candles and the low hum of anxious pilgrims. A visit provides a great opportunity to witness the differences in the worship and devotional practices of Christians from around the world. Be sure to visit the tombs located near the edicule and search out a first-century tombs sealed with a rolling stone somewhere else in Jerusalem – one is located behind the King David Hotel, only a short walk from the Old City – this will give you a better idea of what Jesus’ tomb would have looked like.