Our task for Thursday was our most difficult yet. We were asked to give away flyers about Dedication Church and the church’s upcoming outreach service Jan. 9 near the Metro (subway) stop. Because of the language barrier, this would be a tough task under any conditions. The weather created yet another barrier – the temperature was low, the wind chill was even low. Because of the wind and snow, Pastor Andrei decided we could give away the flyers in the mall food court. 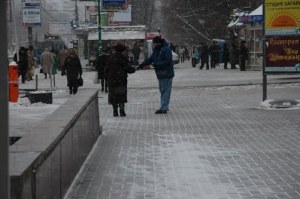 We quickly covered the mall food court, so some of us decided to go outside and brave the weather. We stood near the Metro stop … freezing … and trying to hand out flyers. Many people would not take a flyer. Some would take the flyer and then throw it down. One group of young men took a flyer, then torn it to pieces and threw it in the air. I could tell they were mocking us. Others took the flyer and thanked us.

Pastor Andrei was moved by our willingness to stand outside in such horrible weather.

After handing out flyers, we made our way to the Christian Center where Dedication Church meets. At 3 p.m. we ate a meal (the Russia meal I have lovingly named lupper – it’s too late to call it lunch, too early to call it supper). We were served a traditional Russian meat and rice dish and an egg, cabbage and pineapple dish. I’m allergic to eggs, so I couldn’t eat the egg dish … I felt bad rejecting something. The spirit was willing to eat, but the flesh was weak. The rice dish was great. We had two very traditional drinks with our lunch – Coca-Cola followed by hot “chai” (tea).

The Russian members and attenders sang several songs and Pastor Andrei spoke briefly on the Christmas story as recorded in Matthew’s gospel. He said that we can rejoice because we have been saved from our sin and “Jesus has been born in our hearts. Christmas is a time for believers to rejoice because we know the One who has come, he said.

The second pastor, also named Andrei, should a Willow Creek video about church history and then Dr. Roudkovski, a professor at New Orleans Seminary, preached about Peter’s confession of Christ at Caesarea Phillipi.

Dr. Roudkovski talked about the imagery of the passage in Matt. 16 – the rock, representing Christ who is the foundation of the church; gates, representing the future of the victorious church; and the keys to the kingdom, representing the function of the church which is leading people to Christ. He then shared an awesome story of leading a man to Christ recently in New Orleans. The man had been considering suicide, but prayed that God would send him a reason to live in the next 24 hours. The next day Dr. Roudkovski met the man while leading a street evangelism team. That day the man found his reason to live – Jesus Christ.

After the service we had more beautiful fellowship with this group of believers. One of the ladies who attends is not yet a believer, but she seems very close to making a decision brought a handmade scarf for one of our team members. Vincent, who is only 18, didn’t bring enough warm clothes on the prayerwalk the day before. Natasha had come on the prayer walk and she noticed that Vincent was cold. That night she went home and completed a hand-knitted scarf for Vincent. I nearly cried when she gave it to him. Vincent was extremely moved. You can tell God is working in Natasha’s heart.